Corporate taxation is a moveable feast if recent global events are anything to go by. The OECD and the EU are currently working to bring uniformity to how companies pay taxes according to the countries in which they have operations, while the United States has lowered its corporate tax rate.

While financial variations rumble along in the background, RSM Ireland, one of the country’s top 10 accountancy firms, maintain a solid stance on global tax changes. Aidan Byrne, RSM Ireland Tax Partner, said the key is to keep clients informed of these changes and understand that a regime in another country can be entirely different to that of Ireland.

“When a company enters a new market, the fact that they are tax compliant in Ireland doesn’t necessarily mean that they won’t have tax implications abroad,” he said. “The obligations that they may have abroad depends on the business model. Companies that are operating internationally may create a corporate tax presence abroad, a permanent establishment. But how and when a permanent establishment is created has changed recently as part of these global tax changes meaning the likelihood of creating a taxable presence somewhere has increased significantly. We try to get clients to focus on what are they doing in this jurisdiction by establishing what operations they have in other jurisdictions, who is doing it and what are the contractual relationships with third parties?  Speaking to your advisor, making sure they're well connected overseas and getting the advice in advance of entering the market brings focus to all of that and significantly reduces risk”.

Byrne said there are key things companies must factor when operating in other tax jurisdictions, such as when is it necessary to operate payroll taxes.

“Doing business internationally has become more complicated as a result of all of these tax changes,” he said. “We’re trying to encourage clients to get a proper analysis done early because all too often the client finds out the hard way which is a knock on the door from another jurisdiction saying you should have been registered for some tax, whether it is payroll taxes, VAT or indirect taxation or corporate taxation.”

Byrne said the best advice to give clients is to make them aware that each jurisdiction have their own rules, which although based on broad international principles, may be significantly different from country to country so local in-country advice is key to a successful overseas expansion.

“Because many companies now operate internationally, it gives them an opportunity to look at their business models and come up with a tax structure which meets their operating needs, but which can potentially reduce their overall global tax rate,” he said. “The trend in the 1960s to the noughties was to use mismatches in different jurisdictions tax laws to significantly reduce the global tax rate and tax policy didn’t keep pace with business activities---the rules that tax authorities were relying upon were outdated and ineffective. Internet companies were essentially operating under rules drawn up in the1920s and 1930s.”

Byrne’s mention is timely given the ongoing debate in Europe in relation to the introduction of a digital tax, the most recent version of which has been rejected by the Irish government and other EU member states.

“In a lot of circumstances, I would argue that these companies are already paying tax where VAT is being paid. However, when you look at many of the internet giants, a lot of activity takes place without actual revenues being derived directly, rather it. occurs indirectly. The fact that users are posting content is what drives advertising towards it. But often there’s no taxation or outcome as a result of this interaction. For this reason, the EU is saying there should be an outcome and therefore we’re going to have this digital tax introduced.”

Byrne said international tax rules are being redrawn and made relevant and capable of dealing with the modern way of doing business, in particular digital transactions. with a shift from the concept of old that the legal ownership of an asset giving you the right to enjoy profit in the jurisdiction where the company owning the asset was resident to a position where a company or group is taxed in jurisdictions where they have physical presence and substance and where they create intellectual property and take commercial risks.

“Essentially, this would mean taxing activities in the countries where they are actually taking place,” he said. “Previous tax structures, such as the Double Irish tax structure which has been closed down following Irish tax changes, worked from a taxation perspective as the Intellectual Property (IP), was held in an Irish company that wasn’t resident in Ireland but located in Bermuda or another tax haven

“There has been more change in international tax concepts in the past 5 years than there had been in the previous 50. Companies that are going global need to be conscious of this and get advice prior to entering a market. With my international tax colleagues who are based in over 130 countries worldwide, we are well placed to assist companies as they begin or continue their international expansion” 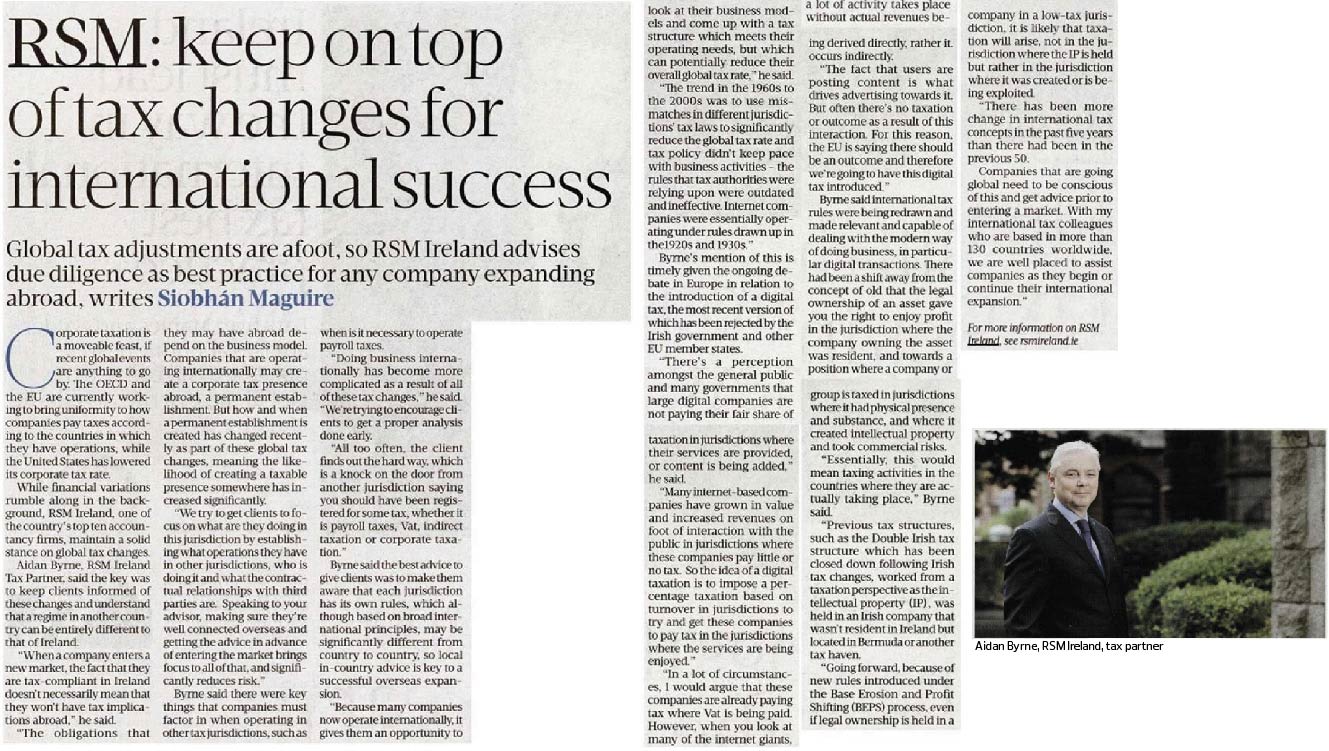 As published in The Sunday Business Post- 9th December2018

How can we help you?